They called themselves Weird Buddies, but there was nothing weird about these kids. 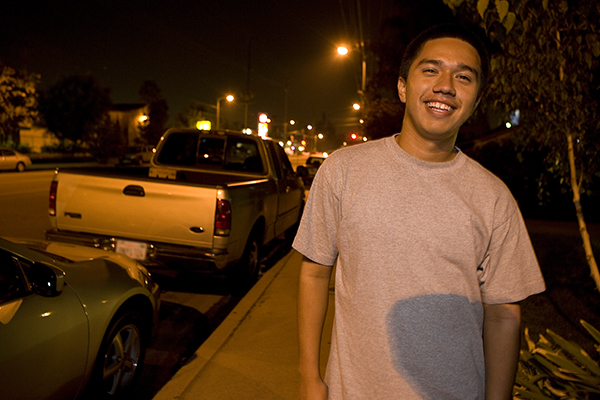 It was 10:30pm, the day not over, completing final pre-production for a project I was producing and directing. I’d been watching the clock all day, looking for a chance to break away for a 365 outing. It was only an hour-and-a-half away from my midnight deadline and my stress was rising. I’d been aimlessly driving around my neighborhood since I left my desk at nine o’clock. It was day thirteen since the beginning of my commitment to interview a stranger and write a story everyday for an entire year. The reality of the task starting to take hold as I drove empty streets looking for anyone to engage with, I saw shadowed figures only a few hundred feet in front of me. Not wanting to seem like a drive-by threat, I opted to park a good 75-feet away from them, and as low key as I could be, pulled my gear from the trunk and in direct view of their eye-line approached. The last thing I wanted to do was come off as a creeper or aggressor, especially as I got close enough to realize they were teens.

They greeted me with the expected awareness I assumed I would receive. After all, I was the old guy who, un-invited, walked into their space. My iPad in hand, I showed them a few of the past stories. The walls dropped as I myself was now on alert in watching whom approached us, I became a protector of the moment as our trust for one another started to take hold. Of the three in the group, only one felt up to having his photo taken. But even with that, they were all accepting and engaging.

I can’t say it was awkward having had one-quarter of my first thirteen interviews turn out to be teens; I expressed from the start of the project that I’d be working in a very organic way and with no agenda, and it seemed the universe kept putting great kids in front of me. An occurrence that continued throughout the months of the project, and the more I met, I witnessed a most prepared generation. Something that I hope you also pick up on in later interviews I will be re-publishing. So, without further set-up, my I introduce you to Poet Salvador.

With the time quickly approaching midnight we were very rushed as Salvador’s ride, one of the two girls in the group, brought to attention that she needed to be home, worried that her father would be nervous if she was too late. A respect that I pray my daughter will continue to give to me as she matures.

The minutes were flying by and there was no time for a formal set of interview questions. But in the blink of an eye, I knew I did not have to ask much. By their stance and respect for each other as well as the kindness they extended to me, I knew I had run into a bunch of kids who were truly kind, smart and caring. I saw no self-agenda, only a real interest to encourage one another. They call themselves Weird Buddies, but there was nothing weird about these kids.

I was taught again, being coached via a few new slang terms, the fullest potential of our youth; and, for the sake of trivia, may I reference the It’s a Small World theory. Turned out they went to a high school where, at the time, a good friend of our family was a Dean—El Camino High School.

Salvador did share a little about himself, telling me of the English class he was taking and how he loved writing poetry. Promised me he would send me a poem to publish as soon as he got home. I waited.

Salvador and friends, thanks for the trust.

BACK
PrevPreviousSidewalk Ghosts / "The World Is The World"
NextSidewalk Ghosts / “There is always a way, you just have to want it bad enough.”Next
0 0 votes
Article Rating
Subscribe
0 Comments
Inline Feedbacks
View all comments